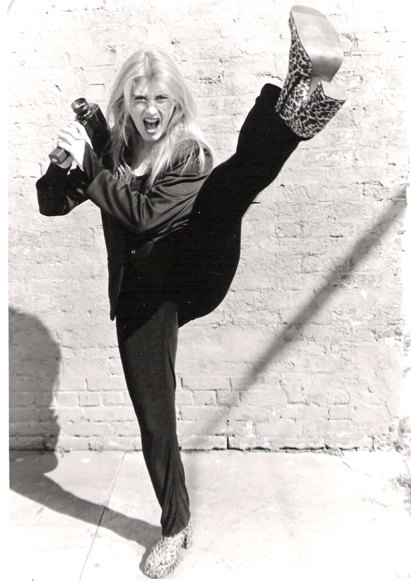 C.M. Soto is a multi-passionate artist based in New Orleans, LA.  Her work has appeared in theaters, music venues, galleries, on the screen, online, and in publications worldwide. Soto’s travels have taken her to Thailand, Alaska, East/West Europe, The UK, Ireland, and Canada.

C.M. Soto (Vinylux) obtained her early music education from her mother’s turntable and vast album collection. She was inspired by the theatricality of acts such as Queen, Electric Light Orchestra, and David Bowie. Throughout her junior-high, high school, and college years she sang alto in advanced choir groups, performing and touring in the US and Canada. For six years, Soto hosted eclectic college-radio shows as a disc jockey. Music was her first passion.

Following a creative writing path, Soto completed her BA in English/Writing with more than 50 publications and six produced theatrical plays. She participated in two Northwest Drama Conferences with her dark comedy, Begging Man with Woman who is Clearly Bored.

In 1996, Soto left her home state of Oregon to attend graduate-level film school in New Orleans, LA, with a focus on scriptwriting. Her son, Athen was four. Soto’s interests in film landed her TV/movie work on a small scale. In 2002, Soto consolidated her previously-published poems into a chapbook of poetry and photos, These are the Rooms to my Mother’s House. The book debut at the New Orleans Museum of Art photography event, Underexposed.

Soto danced with a performance art troupe, NooMoon, taking gigs in New Orleans and Los Angeles. After heading up two bands as a singer and songwriter, Soto took the name “Vinylux” and went solo at Voodoo Music Experience (Voodoofest) in 2004. Vinylux grew a following performing weekly in local venues and art-houses. She sang and played synths, samplers, Theremin-based lasers, and real-time audio samples from a turntable.

Soto learned the graphic arts creating her band’s posters and designing her own books. When Hurricane Katrina hit in 2005, Soto’s family was displaced to Southern Alabama. She returned to the service industry as a bartender and graphic designer. She created catering packets, brochures, and menus for the growing business which got the attention of the local newspaper. The Fairhope Courier recruited Soto and she became a full-time graphic designer for Gulf Coast Newspapers. In 2007, she returned home to New Orleans where she launched her own graphic design company.

Soto and her son moved to her hometown of Klamath Falls, Oregon, the following year. With a partner, she designed websites and print marketing for festivals, restaurants, nonprofits, and government agencies. The duo created the exhibit, Graphic Design as Art Form which opened at The Klamath Falls Art Gallery in Southern Oregon in 2010.

In her hometown, Soto founded The Creativity Collective to provide resources, networking, opportunities, and education for artists and art enthusiasts. It incorporated as a non-profit in May 2009 and opened a 6000-square-foot community art center, The Contemporary Arts Kitchen (CAK). The group received grants and kudos for their programming and youth mentorship. November 2011, The Creativity Collective became a 501(c)3 and the board of directors voted unanimously to move the non-profit to New Orleans. For 10 years, Soto was the Collective’s Executive Director.

Before returning to the South, Soto launched The Traveling New Orleans Show. This 29-piece art exhibit showcased New Orleans culture, music, festivals, traditions, food, and the largest natural disaster on American soil, Hurricane Katrina. The show opened in 2011 at the Ross Ragland theater with a subsequent exhibit at The Klamath County Library. In December 2012, Soto’s theatrical comedy, In The Company of Killjoys was produced at CAK as part of the Snowflake Festival. In May, her son turned 18. Soto and her family returned to New Orleans the following November.

In 2013, Soto revamped her multimedia musical, Ice Scream Theater. The 55-minute play, featuring Nicole Lovince, played 3 nights at the New Orleans Fringe Festival. Soto rereleased her chapbook, These are the Rooms to My Mother’s House to accompany the production.

In 2016, Soto rebooted Ice Scream Theater with herself as Vinylux performing the show at Mudlark Theater and The Marigny Opera House the following year. Soto debuted her original play props and costumes such as wings made of vinyl records, a floor-length birdcage skirt, and a working time-piece belt.

In 2018, Soto traveled to Europe to busk with her trip-pop duo, Vuzz. Their street performances culminated at the 61st Edinburgh Fringe Festival in Scotland. Today, Soto lives part-time in New Orleans where she creates and performs.

Thank you for your interest in the work of C.M. Soto. Please direct any questions or requests to cmsotostory@gmail.com.